I had a chance to go watch the Chelsea versus InterMilan Champions League Football Match few days back. Here’s a report of that game and here is the full Slide Show with more photographs and higher resolution.

Getting down at Fulham Broadway tube station, the route is well sign posted.

Heading out of the tube station with the crowd. Was feeling a bit strange with wearing a suit amongst all the casual clothes, but what the hell.

No drinking at the stadium!

Not many people purchasing the official programme I am afraid. For those who do not know about these things, a programme is a small booklet which talks about the two teams, the past form, interviews with the major players, some advertisements, etc.

That’s where I had to go to queue up to get into the stands. Security was quite high, was scanned thrice.

A rather lonely looking refreshment stand, I could smell the frying onions :)

Not going very well with the programme sales now is it? Then went into the dining hall, had a bite to eat, placed two bets of £10 each on Chelsea winning 3-2 first and then a hedge bet on a draw. Bad mistake as it so happened. Damn odds. Anyway, the food was so so, and I wasn't really that impressed by the dining hall either. But what the hell, I was here for the foot, not the food (if you excuse the rather laboured pun)

Got up to the stand to see it very near kick-off. Chelsea in blue playing left to right, while Inter are in white. The far corner under the big screen is where the Inter fans are. You can see them hedged about with the orange vested stewards. They had their own banners all draped over the boundary walls.

There was this giant Chelsea flag being passed around.

This lady was waving a huge Chelsea flag, there was another one for Inter on the other side.

Ready for kickoff. I was swearing a bit because I could see that Chelsea would be spending most of their time in Inter’s half and that’s away from me. But consoled myself thinking that in the second half, they will be in front of me so that I can see better and take good pics. HA! BLOODY HA!

Inter with the ball.

CH Football club!. all seats had a Chelsea scarf draped over the back. While I am a ManU supporter, I suppose I had to support Chelsea from the British teams perspective. As I tweeted on the morning, this match makes me remember the quote, “do you realise you are torn between two feelings when somebody you know has been elected to high office? local pride versus fear for your country”. So while I was cheering up Chelsea for being a British club, on the other hand, its CHELSEA!!!, anyway, like the chaps in the photo, I too had a blue and white scarf entwined around my neck.

This seems to be some kind of a directors box or perhaps a commentator box, not sure what. Strange place to place it, at the corner of the stadium. I wasn't really impressed by the stadium either after having spent time in Wembley, Twickenham, Old Trafford etc. etc. It was squished and squashed and not at all soaring. Too small. Anyhoooo.

The Chelsea goalkeeper spent long period of time being all alone.

One of the few times that Inter came into the Chelsea half. The photographs are too small but you can see how the kick happened and how the goalie saved the shot.

Here’s the start of the damn diving. I swear, they spent more time writhing on the ground than playing. As you can see, the referee came along and told the player to get up and start playing.

The Chelsea goalkeeper kicking the ball.

Both managers were up on their feet.

Another view of Inter taking a shot at the Chelsea goal.

There were these boys wearing silver vests around the field who were carrying one ball each and would collect the balls when they would go outside.

It was a bad tempered match, the referee was handing out yellow cards like chocolates.

Official photographers. One day when I grow up, I will have a kit like this :)

John Terry, the Chelsea Captain. Man he has an impressive package.

As time went on, the managers were getting more and more excited.

This silvered box hanging off the roof was a strange one. Is this the commentators box? Or the stadium managers? Not sure. Might be the TV box.

The railings were hung with various banners, there were banners from people in Cyprus, Germany, Jersey, and all over the world. Good coverage.

Half time, the score is 0-0 and the players file off on the right.

This time I could see Chelsea’s Drogba making a shot and Inter’s keeper making the save.

Another foul and another yellow card. 56 minutes and both sides had committed 11 fouls each. As I said, it was a factitious ill tempered match.

Another man bites the dust. Jeez, these guys are champion whiners. You can see the first aid men in black rushing to provide medical help. HA!, my daughter is braver than these boys.

And then Inter scored. 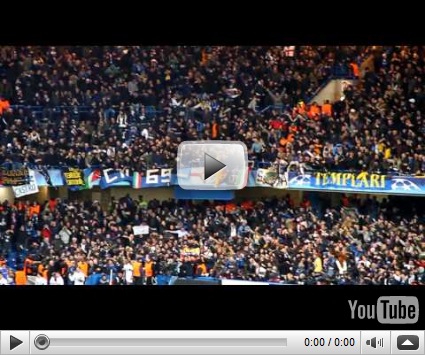 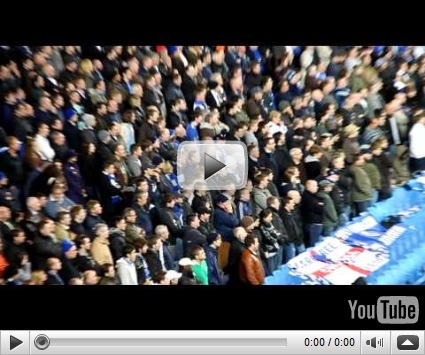 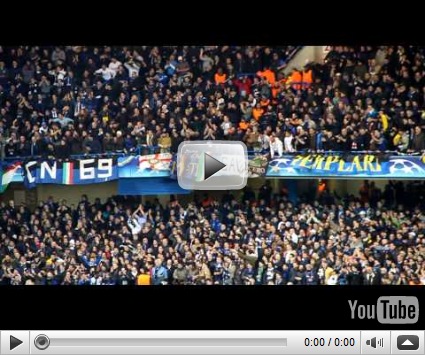 The Inter fans went absolutely berserk. Apologies for the quality of the video, I had a bunch of Italians in front of me who were going absolutely mental.

The stewards moved into the front of the Inter stand, presumably to guard against any misbehaviour.

Its the dreaded red card for Drogba and another yellow card. It was ridiculous.

And that was it, the end of the match. Not very impressed with the quality of play either, but if you wanted to read about the game written by a professional journalist, here’s a good link.

Posted by Bhaskar Dasgupta at 14:35