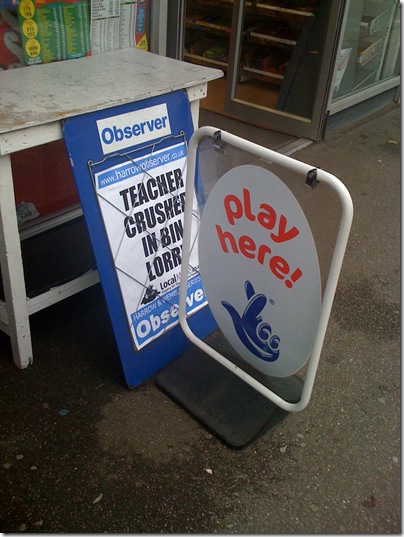 While walking to work, I noticed these 2 signs leaning against each other. The first one is from a local newspaper, talking about how a teacher was crushed in a bin lorry. Pretty bizarre situation, no? What on earth was a teacher doing inside a bloody bin lorry? But besides that is the sign for the lottery. And the crossed fingers signifying luck. Not very sure the teacher was very lucky now, was he?

Posted by Bhaskar Dasgupta at 09:45 No comments: 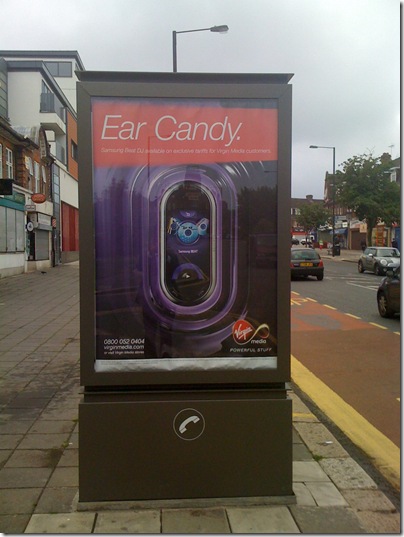 Now why on earth would I stick a piece of candy into my ear? its wet, its sticky and can cause danger to your ears. Virgin must be stupid to start trying to advertise with this imagery in mind, gaks. Its one thing to have a lovely girl stick her tongue into your ear, now THAT’s candy, but……. candy??? gaks. Imagine the situation when you have to wash it all out!

Posted by Bhaskar Dasgupta at 21:35 No comments: 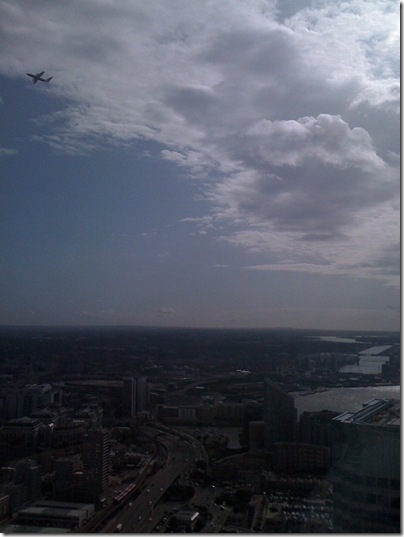 While speaking to a friend of mine, I noticed a plane taking off from City Airport and by the time I managed to click it, it was almost out of the frame, but looked good, the tiny plane right up on the top left hand side corner and the tinier airport at the bottom.

Posted by Bhaskar Dasgupta at 21:28 No comments:

While ambling around in Harrow on the Hill, looked into the shop window of Adams, the kids schoolwear shop. This tiny mannequin was sitting there. 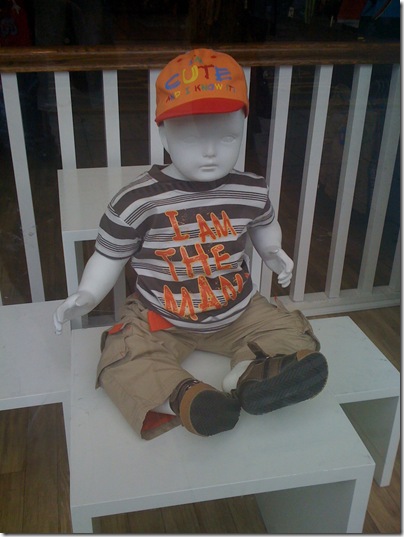 Now I can understand people thinking that its cute, but the face really is spooky, why would anybody think this is cute? scary stuff.

Posted by Bhaskar Dasgupta at 20:50 No comments:

Views from the Barclays Building

Had to visit Barclays for a meeting and was a few minutes early. Thankfully, my meeting room overlooked the east side of London. Now I have taken many pictures from the HSBC building, but I always had the Barclays building blocking the views. So this was a good moment to click off some nice photographs. The light was brilliant, shadows and drifting lights…

this is the highway from hell

This is the parking lot for the Billingsgate Fish Market

can you see how the sunlight illuminates part of the river?

panning right across the river.

the dock with some moored river boats

looking up the river, but notice the sailing ship in the middle of the photograph which is emerging from the lock?

The ship moves off and the  lock starts to close

the lock is almost closed now.

Another view of the moving sunlit area

The new and old parking lots are so clearly delineated. One day I need to go to the Billingsgate Market and buy some fresh fish :)

Here is the slideshow.

Posted by Bhaskar Dasgupta at 05:28 No comments:

Diya recently had her sports day at school. It started with a race.

Sitting patiently waiting for her turn. There were colour coded teams, red, green, blue, yellow. Diya was in the blue team.

And here we have a video of the race itself.

now here we have an obstacle course. Watch how daintily she does her race, lol.

She is supposed to kick the football down the lane, around the marker and back again.

Then its the time of the egg and spoon race. Walking very very carefully…

Its the time of the sack race, she did well, but the weather was bad. The blonde lady in white is her teacher, she is quite fit. I tried to get Diya to kiss her and say that its from her dad, but that silly girl refused to do so. Signs, she is so useless in all these important things…

Then it started raining so they all went inside the school into their schoolroom:

This is the exploration area of the class. Playing with some complicated stuff…

Her footprint on the ceiling. Everybody has tons of untidy footprints but pea princess Diya has one tiny tidy footprint.

This is the blue team mascot with the team member names.

This is the reading area of the classroom.

See Ms. Pullen, she is my class teacher (Daddy says she is a bomb). And my 2 friends and my friend’s mum.

And I got a prize. Full speed ahead……I hope she gets really into sport, her football control is specially showing promise, lol, although you cannot make it out from the video, lol

Here is the full slideshow.

Posted by Bhaskar Dasgupta at 17:49 No comments:

Here are some of the photographs of what Diya has been up to in the last year at School.

First is addition, but notice how she writes the number…welcome to lefty land

we photocopied our palms

And wrote a newspaper. Quite impressed by her erudition say the  proud daddy.

pardon the typo’s, but I typed it up, after visiting the farm.

something about a garden

made a family tree

and this was a picture of me in drama class.

I got a gift from my teacher.

And a thank you letter.

And another letter from the second teacher.

Here is the full slideshow.
Posted by Bhaskar Dasgupta at 16:57 No comments:

While waiting for my darling princess to finish her dramatics class, I wandered over to the nearby church, St. Johns, Greenhill, Harrow, which I had noticed while getting to the club building. Its an interesting little church. Well, its not so little but its quite big, specially when considering the size of the original Harrow town. Quite big. Here’s the history behind the church. Its comparatively quite new compared to some of the other churches in the area.

This is the back end of the church, well, you can make it out with the line of garbage bins.

The windows of the rear of the church. Strangely enough, none of the windows were stained.

Just outside the church, there is this bench. And the town council, in its amazing judgement, decided to plonk a stinking garbage bin right in front. Now why would you do that? really silly.

The main window of the church seen from the back.

There is a World War 2 memorial here.

Now moving towards the entrance of the church

And there is the most adorable cute tiny little door on the side, mostly hidden by the shrubbery. I wonder what it would be used for?

A tree stump which has been cut down.

The main entrance. It was really a lovely day, as I keep on saying, if you wanted to see iridescent green, you need to come to England during summer to see this colour. The only other place where I have seen this shade is in South Africa.

And the church is open :)

Presumably this was the main door at one time but now has been locked up pretty much for keeps. Even the door handle has been removed.

The hinges were seriously works of art. Can you see how intricately carved they are? lovely.

looking back at the main street, with the advertisement on the bus advertising Terminator..

The church’s these days are obviously dying, attendance is very poor and when buildings become derelict, they attract the wrong crowds. Far too frequently, I see churches being used by druggies and homeless people for nefarious purposes. So churches, instead of being houses of god, open to all, are far too frequently surrounded by barbed wire, tall fences, bottles of booze and ciggies. Welcome to hell.

Presumably the foundation stones on the entrance lintel stones.

The altar. The windows at the back are the windows which I saw right at the beginning. See? no stained glass windows..

The internal stonework is very nice, you can see the two chapels on both sides. The pulpit was also nicely carved.

I couldn't take the pictures of the war memorials templates on the left hand side chapel, but here are the pictures from the Church’s website. These are the names of the parish men who died in the first great war.

Then you have the World War II memorial.

Posted by Bhaskar Dasgupta at 06:03 No comments: