While trundling around London with a camera, you get to capture the commonplace but still great sights. Here’s my take looking at Baker Street Underground Station. Baker Street already resonated with me because of the association with Sherlock Holmes, but the fact that it was the first underground train station obviously excites an amateur history buff like me. Plus I always wanted to be a train driver but ended up as a bloody boring banker. How the mighty have fallen. Anyhow, I am not planning to give you the history of this station here, for that you can go check the wiki entry. Only my thoughts and commentary are here.

This is the main ticket hall. Quite an interesting arrangement on the roof with the beams. Very nice patterns are formed.

Moving towards the Circle and Hammersmith line platform, you can see the World War I memorial. It is made out of marble, with a lion on top killing some kind of a serpent like monster. Pretty good work. The inscription on the top says:

“The men from the service of The Metropolitan Railway Company whose names are inscribed below were among those who at the call of King and Country left all that was dear to them, endured hardness, faced danger, and finally passed out of sight of men by the path of duty and self-sacrifice, giving up their own lives that others might live in freedom. Let those who come after see to it that their names be not forgotten.”

This year is the sad year when the last WWI British veteran died. Quite poignant. It was supposed to be the great war, the war to end all wars and still men are dying to this very day.

This is a 12 inch artillery shell, presented by the Vickers (remember the references to this firm’s guns in Biggles? or am I showing my age?). It has a slot for donations.

The signage shows the way to the other platforms as you can see. The interesting bit was the railway clock on top.

The ironmongery on the round window shows the motif for the Metropolitan Railway. You see the M and R.

There’s the platform where I need to get to. The water damage can be seen in the frankly mouldy and leprous white marking on the wall and the buttress support. Looks faintly like you are descending into a World War time interrogation chamber, with the harsh light and dingy brick walls, no?

So why am I showing you manky old roofs and arches? Well, they are pretty old for one and secondly, you can see the old iron supports and scaffolding that were originally put up. Could do with a good clean, i tell you.

These were previously gas powered, but now they are tungsten lamps. They emit a pretty bright light. These are the original light fitting, see the

Between the platforms you have wood panelled corridors, go figure. Something that wouldn't be out of place in an old corporate setting is quite eye catching here. This corridor crosses over the tracks.

Looking up the tracks, a train is approaching, but on the other side, you can see wooden cupboards. No idea what’s in them, but it is so surprising to see wooden furniture in a station like that.

Looking up the empty tunnel. On the left, where you see the sodium orange light, is the spur line which moves into the metropolitan line.  Its very grimy but you can see the tunnel curving away to the left, nicely highlighted by the train traffic and signalling lights.

On the left is a Chromolithograph dating back to 1863 comparing how the station looked almost 100 years ago and how it looks today. Can you see the ventilation and lighting shafts? they are still the same (more about that lower down). Obviously the clothes are a tad different, but the platforms are now much higher than before.

The platform has lots of plaques and posters showing the history of the construction and how it was made.

There are these crimson drum like speakers across the platform which are used for station announcements. Ok, why that colour? doesnt match with anything, but anyway. I was trying to figure out why on earth would somebody actually put a damn sticker on a speaker which has been disconnected? Weird.

These tile lined holes were originally meant for ventilation and to let light come in, but have now just been boarded up. This is how the ventilation holes look now. Look vaguely like upside down urinals, if you ask me. Very strange bizarre.

But we are but the people who travel these trains...

Sitting in front of a damp, water splotched wall and absentmindedly picking their nose while waiting for the train. Puzzled looks on the right.

How on earth did this lady manage to get a phone into her back pocket? Besides surgery, I cannot see how.

Somebody is reading a newspaper, somebody has luggage and two friends are busy gabbing away.

Totally bored out of their mind while waiting. Then the lady got tired of waiting for the tube and then decided to plonk herself on her friend’s lap. 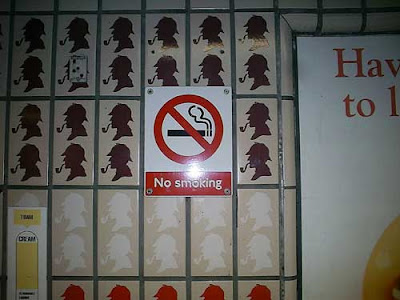 How progress moves, even Sherlock Holmes with his characteristic pipe will not be allowed to smoke down here. It does not make any difference that his museum is located opposite the street of Baker Street Station and that perhaps the pipe smoke could have curled itself towards the station in older times, now there is no exception, not even for him. Here is the full slide show.

Posted by Bhaskar Dasgupta at 20:28 2 comments:

I burst out laughing when i saw this image.

On one hand, we are talking about German Precision, on the other hand, its stuck up on a Edgware Road Tube Station Wall. The frame is wonky and manky, paint is peeling, the surrounding brickwork is tattered, repaired unevenly and looking more like a ruin. The highlighter lamp at the bottom has fallen on its side so lord only knows how the lighting will happen. The wiring is exposed in front of the poster. German Precision meets decrepit British Infrastructure. Ironic..

Posted by Bhaskar Dasgupta at 23:42 No comments:

Well, the snow kept on falling and I kept on taking photographs :) Here’s Part One of the Snow Day series.

Woke up to see this sight out of the kitchen window. Got dressed post haste and went off into the back garden…

Even the fence tops were covered.

When the EuroStar trains can have a problem with the snow and ice, what about my little wooden train? But the way the snow piled up on the chimney, it looks like its blowing smoke. Very cute.

My footprints from the morning.

The bells are silent as well.

It started off looking like a grey day when glancing over the rooftops and naked trees.

The pine tree at the bottom of the garden was covered a bit with snow.

But it brightened up to the east

The traffic was still quite heavy

And you can see how they parked, and a car that had driven off in the night but left its sign in the form of a naked rectangle on the road.

Its quite cold. Dumbo, Softy (that’s the dark dinosaur in the far end) and Simba are all covered with a blanket as they find it cold as well..

But not this sparrow….

See the car leaving the green? we were driving off yesterday and I was driving very slowly but still, when i braked before the turn, no joy, kept on going and banged into the pavement. No harm done, but it was treacherous, that area is full of total black ice, very dicey to walk and drive.

So you walk across the green showing footsteps on the snow.

A view of the roof, looks like a ski jump, no? lol

Another view across the roof tops to the Church Steeple on top of Harrow on the Hill.

The colourful cars with a sprinkling of snow.

but the plants were still growing.

And my footprints are slowly vanishing as will the snow.

Posted by Bhaskar Dasgupta at 11:57 No comments: