Usually I get into work by about quarter to seven in the morning and have the joy of seeing the sun rise over the east, the Thames Barrier, the O2 arena, and the assorted cranes and other sky scrapers But this time, it was foggy, but still managed to click off some photos of a dim sun.

It was all foggy in the distance and you couldn't see the city from the other side.

Road rollers are never cute with the exception of Rolly of Bob the Builder.

These machines are big, thick clunky suckers which roll over the hot asphalt and roll it smooth. Obviously you need a big one because you are doing it to a big road and you need something wide and heavy. and that's what my impression always was, that road rollers were of that size, you stay away from them.

While walking around on a road on the way back, saw this nicely done up road on the left.

this presumably is the bit which mixes the tar and the gravel, looks like a weird mouth or a horrible womb opening, OOOOO, horror film time, but kept on walking and then the surprise.

it was a baby roller. So cute, just look at it, it would find rolling a pancake difficult, let alone a road but I suppose you need something like this for tight corners and small spaces.

And here's the back end of the roller. Found it very cute indeed.
Here is the full slide show as usual.

Queuing for a note

My colleague from HK sent this photo, we seem to have gotten into the habit of taking interesting photo's and sending it to each other.

So when this blackberry image arrived on my blackberry, I was very curious, what are they queuing about? But first a digression. These people are queuing at the foot of this fascinating building.

This is the Bank of China Building at the back looking like it has been made up of polygons. Yours truly took this picture couple of months back.

Here's another picture of this very interesting building taken when I was there last year.

During the night, its lit up via those white channels and looks amazing. It looks like lightning is running up and down the skin of the building.

Anyway, as it so happens, the Bank of China is selling special banknotes commemorating the Beijing Olympic Games and these people are queuing up to purchase those notes. Estimated resale price? HK$ 21.00! These are also considered to be good luck gifts!, how interesting!

And here's the time that our son starts becoming a teenager. He will join high school from next term onwards.

We received his year 7 report yesterday and while I am happy he has scored tops in everything, I was very surprised to see that he just got an average grade in ICT. In his second training school where he goes in the evening and during the weekends, he is doing Year 10 work and I am quite impressed by what he has done with SDLC, html and websites. He is building one for my wife..

But his score was not good at all, just an average grade which was very surprising. And he, typically, blamed his teacher. So I am afraid he got a right bollocking from me about his grades. I can understand that he would be very bored with doing stuff like power point and word when he is doing very big and major stuff like SDLC and HTML programming.

But still, he has to learn to do boring stuff and also to score grades, understanding what he is going through and grades are two different things, so I am afraid it wasn't a good time for him. And then he asked about upgrading his mobile phone which came at a very bad time for him as well.

Anyway, so on a slightly damp note and while he was in a huge sulk (welcome to sulky teenager time, sighs), we went out shopping for his new clothes for the new high school he will be going to from next term.

we had a cheeky monkey with us and I was tasked to keep her happy. She found the changing room and the mirror. And she was off making faces and posing.

getting kitted out for a Blazer

outfitters with measuring tape huddling around the client.

another cheeky monkey in the shop.

the shop was reasonably full of customers , rows of shelves with piles of school clothes.

And jumpers and the like. Many many moons later, many hundreds of pounds lighter, we stepped away from the shop. It was a strange sight, to see him dressed in a grown up Blazer. My son is becoming a man, that tiny boy who hugged me like the below in 2001 is now no longer that, he is stepping into manhood... 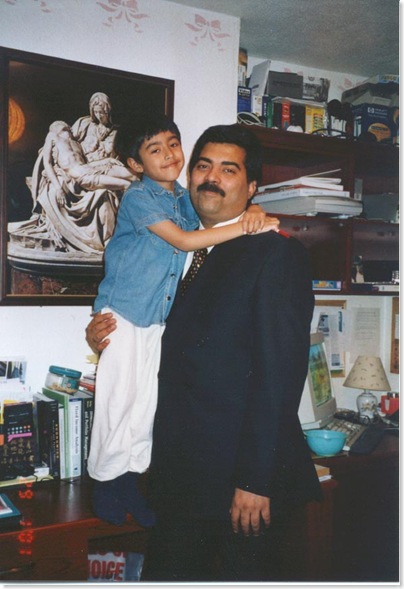 A pig is born

A little painter got a ceramic unpainted pig on her special day (this day happens on the first day of every month, which is her birthday, so we do a mini birthday celebration on that day). So then she decided to paint it, here's the pictorial progress of that masterpiece being created.

mum's putting a bib around me, I have the pig on a piece of paper, a row of paint pots, holding the brush and the pot of water on the side.

she got it right on the nose

this requires a steady hand

many moons after, and a huge amount of concentrated attention (look at that face, it was amusing to observe the single minded attention she paid to painting this)

the colour of water is dirty from all the painting, and the pig is finished.

And the proud painter. She is smart, when we tried to fob her off with pretend plastic money, nothing doing, she wanted the real stuff, she said, I want the metal coins, not the play money!, sighs, here goes another bit of innocence!

Here is the full slide show.

Posted by Bhaskar Dasgupta at 22:51 No comments:

We had a bloody fire alarm in the building yesterday and well, thankfully, I got wind of it and escaped from the building before I had to walk down 60 flights of stairs.

The estate has got a huge screen up on the green and people are watching Wimbledon.

It was a lovely day, I spent a nice time out there enjoying the summer and looking at the people watching the game. It was more fun watching the people than the game! :)

Posted by Bhaskar Dasgupta at 08:16 No comments:

My little girl has all grown up now. She is now going to move on from nursery to pre-school and from September onwards, join her first school. So we needed to purchase her first school uniform. It was a strange feeling for me. A small step away from us for her. She is now being told how to dress by somebody else. And it is so regimented now. On the other hand, she is also growing up, becoming a young lady. Has desires and opinions on her clothes. And it was so lovely to see her shopping. not tired at all, having fun and games, dancing around. So here are some photographs of that shopping expedition.

Mum's checking the sizes, Dad's completely useless, his hand to eye to dress size coordination is like a dyspepsia afflicted pig.

all the T-Shirts for the various schools in the council. So many parents will be out there shopping for their children.

Saturday Day Fever!!!!, I love shopping!!! I can dance all day in shopping malls...

And yet another pose! :)

this chap climbed on my ride! But I was polite and let him

Boys, they know nothing, even of cars. I had to tell him where to push the button so that the horn sounds. Useless boys.

And then he took his hands off the wheel and just pressed the horn button. Typical boy, at least I have my hands on the wheel (look at the wry expression on the young lady)

Mum had gone into Boots to check out some stuff, so we were waiting around for her. And then Baba turned around and I had vanished.

I noticed my boyfriend Ramsay from school, so I took off without telling Baba to go see him.

And Ramsay suddenly turned into a weird chap, jumping around in the mall, trying to impress Diya, feeling shy, while Diya was looking at him with an amused look. Both Dad's traded amused smiles.
So ended the journey of my little girl growing up...

(Here's the full slide show)
Posted by Bhaskar Dasgupta at 08:08 No comments: