I have seen this word many times while browsing eBay and the internet but never really got to grips with it. Actually, the Chinese, Korean and Japanese civilisations are frankly the big weak points for me, one day when I grow up, I will delve deeper into this. Anyhoooo, there’s a nice little exhibition of this in the British Museum. So what is it you ask? I quote from wiki:

Netsuke (根付?) [netsu͍ke] are miniature sculptures that were invented in 17th-century Japan to serve a practical function (the two Japanese characters ne+tsuke mean "root" and "to attach"). Traditional Japanese garments—robes called kosode and kimono—had no pockets; however, men who wore them needed a place to store their personal belongings, such as pipes, tobacco, money, seals, or medicines.

Their solution was to place such objects in containers (called sagemono) hung by cords from the robes' sashes (obi). The containers may have been pouches or small woven baskets, but the most popular were beautifully crafted boxes (inrō), which were held shut by ojime, which were sliding beads on cords. Whatever the form of the container, the fastener that secured the cord at the top of the sash was a carved, button-like toggle called a netsuke.

Beautiful pieces no? crap photography though

this is a writing box with landscape. And the artist used lacquer techniques to build up layers of gold and silver. Most exquisite. 1700’s

bit naughty there, but here’s another of my goddesses, my girlfriend…

she is just beautiful and exquisite, check out those curves. And look at the shiny parts, right on her bottom. Beautiful. I just love her…

And while walking down the stairs, I noticed this green haired person. <sighs> in the British Museum..

anyway, after spending a day, i had to get out of here..lovely lovely place and a great day here.

Posted by Bhaskar Dasgupta at 06:25 No comments:

this is the Epifania cartoon, around 1550AD, black chalk on paper. This is only one of two cartoons (from cartone – Italian for large piece of paper) by Michaelangelo.

He touched this up when he was 70 years of age, but he wasn't the painter, this was done by his biographer Ascarno Condivi which is hanging in the Casa Buonarroti in Florence. 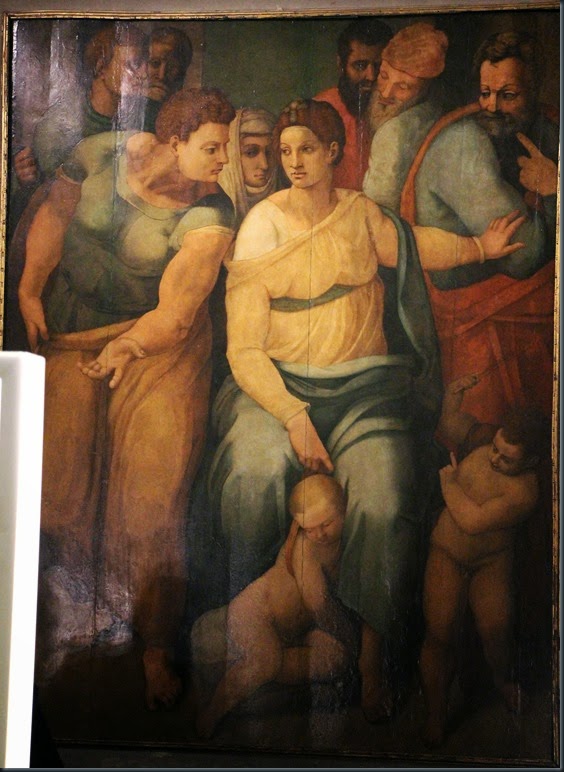 Posted by Bhaskar Dasgupta at 10:36 No comments:

She is my goddess. One of my old girlfriends, and believe you me, I have a few scattered around the world. A sailor and all that. From the first time I saw her, I fell in love with her and worshipped her from afar.

there’s much more detail on this page of hers. Funny story, she was originally offered to the British Museum as a sale but it declined in 1935. And then she finally found a home in the Museum in 2003 for 1.5m…

We have no idea where she came from, from what age, and there are quite a lot of debates about what or who she represents. But I will just say that she is a goddess of the Night. And leave you to admire her beauty in the following photographs

Posted by Bhaskar Dasgupta at 07:22 No comments:

Aug 2013: Writing down the ages at the British Museum

One of the joys of perambulating in the British Museum is to observe old writing. Here are some of the lovely pieces I love..

Now this is a library that one would love to inhabit. The room just smells of old books and bees wax and learning and knowledge and leather..

And then in the upper floors of Roman Britain, you can see letters written on wooden tablets.  Vindolanda Tablets.

And one of the oldest maps of the world, showing Babylon in the centre of the river Euphrates, with the world around it surrounded by a ring of water. 700-500 BC.

a hymn to Ishtar, an older Rosetta stone if you will. each line is written in Sumerian and then translated into Akkadian. wonderful.

this is the famous Gilgamesh Epic tablet…

The clay cylinder of Nabonidus from 555-540 BC. Talks about temple reconstruction

So Sennacherib was an amazing king and this talks about how he became the king in 705 BC and ends in 701 when he receives tribute from Hezekiah, King of Judah. Just read and studied this recently and to physically see the proof was exquisite.

this was a jar stopper, certified by 2 officials, you can see their finger and thumb impressions on the top..from Jemdet Nasr Period, 3000-2900 BC…

And this is a 5 day ration list, same period, same place…some kind of a contract for workmen?

Posted by Bhaskar Dasgupta at 07:22 No comments: